Sorry for the long delay. Sometimes keeping up with all the different forms of communication can get overwhelming. I dropped the ball on Anna's blog. Anna got off ECMO on Wednesday night 10/16. By the end of the17th she had an epidural in place and finally the dreaded ventilator was removed. Anna walked a bit that night. What a huge leap she took in less than a week. Friday night brought her move to the step down unit. After being in the very posh ICU, the step down unit is rather depressing. It's old, the rooms are tiny and the waiting area is pathetic.
Each day Anna has increased her walking. It's an ordeal getting all her chest tubes (she has had up to 7 of those but is down to 5 now) and IVs situated (I haven't kept track of the IVs. She had at least 12 at once in the ICU, she's down to 2). Anna uses a walker that has arm rests about chest-high. It gives her something to rest on and more stability. She is now up to walking just about 1 mile. I think by the end of today she'll be walking over a mile. Impressive considering her pain level is at an 8 (on a scale from 0-10). The sad news is that yesterday a possible new blood infection was detected. They don't know what it is exactly but her white blood count is elevated. The Drs were concerned it might be related to her epidural (which was providing pain relief) so they took it out. Not good news for Anna. She is in a ton of pain now.
She hasn't slept much here due to the pain and she's really uncomfortable. She cannot eat or drink by mouth. She would give anything to get even just a sip of water. Her vocal chords and epiglottis are not doing their job of closing her airway and protecting her lungs from food and liquids. She has some exercises to do which may help strengthen things.
Although Anna doesn't feel strong, I am amazed by her ability to tolerate all she has gone through. She's not up for blogging yet (and probably won't be until she gets out of the hospital---no energy) but when she is, get ready to hear all she has to say. She won't sugar-coat anything! :)
Posted by anna at 11:50 AM 2 comments:

All signs are pointing in the right direction. Anna is still on ECMO and the ventilator but there is talk of getting her off ECMO today. Her blood pressure is stabilizing. She has grown a staph infection and another infection but both seem to be responding to antibiotics. She is alert and communicating with signs and writing. She's exhausted and in some pain but hanging in there. She wants the ventilator out (who wouldn't?) but is tolerating it well. I am so proud of her. She is a warrior!!!!
Posted by anna at 10:00 AM No comments:

Anna is still on ECMO. She is improving today little by little. She's got gobs of tubes coming out of her, so many she's reminding me a bit of a transformer...maybe she'll start flying :) She's still unconscious. That's best because she doesn't want to feel anything, especially that nasty intubation tube jammed down her throat. I think she told you all about her fears of that thing. Every now and then she comes to and begins to move slightly. I can tell she's saying, "Get that thing out of my throat!" They load her up on pain and sedative meds and she goes off to La La land again.
That's the update for today. I'll tell you more tomorrow.
Posted by anna at 10:24 AM No comments:

Anna's surgery is done!! She is having some complications at the moment. She is connected to something called ECMO. Like bypass but for the lungs. It happens sometimes when the new lungs are sluggish to function. We'll know more in 24-72 hours.
Posted by anna at 9:09 PM 1 comment:

Hi! I'm Karen, Anna's mom. Anna gave me the pen to keep all her blogollowers posted :) She got the call this morning around 9:20 am EST. She didn't hear if she was the primary or secondary which she believed meant she was primary. She was right! I'll let her fill you in with all the details from her point of view. She went though the same pre-op prep as she did on Tuesday.  At 2:04 the transplant coordinator called her and told her "it's a go!" Within about 15 minutes they whisked here off to surgery.

Hello again!
I got the call this morning.  I am secondary for these lungs so this is likely to be a dry run but I might get out of rehab :p.  It's funny because when I got the call all I thought was I want to go back to sleep!  Don't worry I didn't I got up got my stuff and we headed out to the hospital.  After arriving they sent me up to the short stay unit.  Now we wait some more.  Stay tuned!
Posted by anna at 8:59 AM No comments:

The foreigner and the pity diner

Why hello internet people.  Yes another week has gone by and still no lungs, in fact I haven't even had a dry run.  At this point I am really starting to wonder if I am actually on the list (no seriously I even sent them an email just to double check :D ) I honestly hope I'm not actually listed because that would explain why after 2 weeks I am still waiting. I know I know in the grand scheme of things even 2 weeks is quick, heck in the real transplant world (not the crazy fast duke world) 2 weeks is nothing.  I really feel for people who have to wait months or even years, it has been hard waiting the past 2 weeks.  The good news is Sebastian, our exchange student from last year, is visiting!  It is great getting to see him again plus he provides a nice change of pace!  Along with the arrival of Sebastian this weekend brought our second trip to the melting pot.  Our first trip was a splurge dinner my mom came up with since we were both kind of tired of being here and discouraged since I hadn't gotten lungs yet.  This past weekend we decided to go back because....well for the same reasons.  It was actually quite fun.  I'm guessing not many people return to the melting pot the following weekend as everyone (staff people) recognized us. (I guess being a 22 year old on oxygen might be a tad memorable as well). This time though we met the owner.  He was very friendly and and we chatted a bit.  After hearing our story he decided to comp our meal which was sooo nice!  We had been joking about making weekly trips to the melting pot our thing until I get my lungs, after that it might just be.  Unless I'm in the hospital you know where I'll be Saturday or Sunday night (both???)
Until then it's more rehab for this kid (how long am I aloud to call myself that?)
Cheese out! Dippin sticks!
P.S yes I am really on the list, the rational part of my brain always knew that but at least now I can shut that crazy idea down completely. 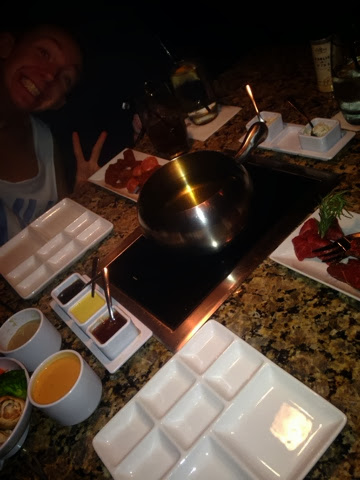